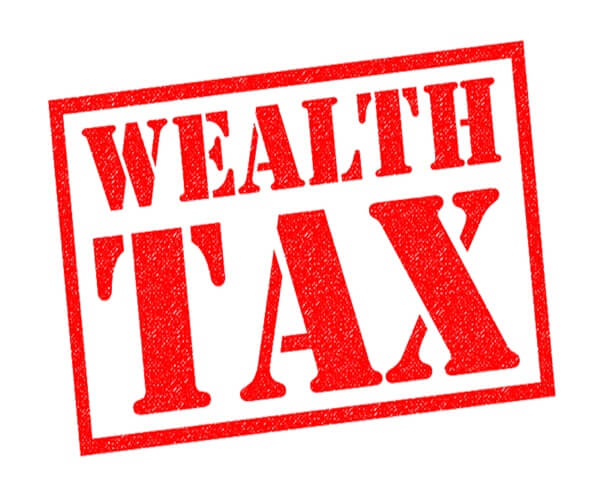 Here in the United States, we spend a lot of time arguing about income taxes . . . who should pay, how they should pay, and how much they should pay. Right now, the average American forks over 13.5% of their income in individual income tax, and 30% of their income in federal, state, and local taxes overall. Of course, “average” covers a pretty wide range — 50 million families pay no income tax at all, while the top twenty percent of earners pay over 69% of all revenue collected. It costs the economy $409 billion just to figure out the bill and get it paid.

Here’s the biggest problem with today’s tax system: no matter where rates fall or who picks up the tab, Uncle Sam still spends more than he takes in. Keeping up with spending is like playing tennis against Serena Williams — if Serena was an octopus with racquets in six arms. So politicians are constantly looking for new ways to cover their bills.

Now some politicians are proposing wealth taxes on the richest Americans. Massachusetts Senator Elizabeth Warren’s plan starts at two cents for every dollar of net worth above $50 million, rises to three cents on amounts above a billion, and raises $2.75 trillion over 10 years. Vermont Senator Bernie Sanders’s plan climbs all the way to 8% on assets over $10 billion. Both senators argue that limiting their reach to board-certified fat cats means most voters have nothing to fear from their plans.

A wealth tax may sound like an impossible lurch to the left in today’s politically polarized era. But polls show it winning more support than higher income taxes. And if you own your own home, you’re already paying one in the form of your local property tax. The real problem with a wealth tax is making it work. It doesn’t matter how small a slice it takes, if the people who owe it can’t or won’t report their balance sheet accurately — especially if it’s stuffed full of hard-to-value things like businesses, real estate, and art.
Want to see how much we can raise with even smaller slices? Consider cal

ls for a tax on financial transactions. Hawaii Senator Brian Schatz’s proposal is typical: he would charge just one-tenth of a penny for every dollar on stock, bond, and derivative trades. The Joint Committee on Taxation estimates this would raise about $777 million over 10 years. Bernie Sanders has a similar proposal that would charge 0.5% on stocks, which he says would raise enough to pay for free college (and bring the species Homo Billionairus to the brink of extinction).

A financial transaction tax would be far easier to manage than a wealth tax. It would-also take dead aim at the sort of high-speed trading Michael Lewis described in his 2014 book, Flash Boys, which Schatz says accounts for half of the market’s eight billion daily trades. “High-frequency trading . . . screws regular people; that’s the main reason to do this,” he says. Does that sound like creeping socialism? Well, Australia, France, Hong Kong, Italy, South Korea, Switzerland, and the U.K. already have financial transaction taxes, and their markets seem to be doing just fine.

We spend most of our time looking for the green lights in the income tax system that let you pay less. But we would be negligent if we weren’t keeping our eyes out for new ways that government can nick you for tiny little slices that add up big. We’ll be ready with the plans that help you pay the least.